A Non-POM, or a 'Non-physical object money' is a form of reward where the reward issued to the individual cannot be transferred, can only be created from nothing as it is earned, and is deleted (or retired) once it is spent.

The concept was originally conceived by Larry K. Mason in the 1970s and was made more popular through various proposals advocating for and inspired by its idealogy. 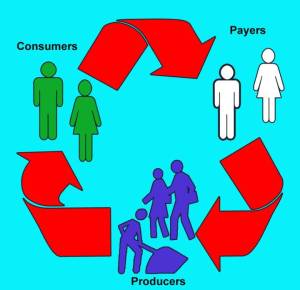 The original concept by Larry K. Mason of a non-physical object money economy features a three-party transaction model of producers, consumers, and an organisation that rewards producers from the calculated results measured from their actions, methods of production used, and consumer feedback.

Producers supply (or create) goods and services and provide them to consumers. Consumers transact goods and services in such a way that the reward amount in their account is deleted as they spend it. Producers earn their reward once a benefit of some kind is produced, whether it be to the consumer, or possibly another factor may be involved such as the impact to the environment.

Proponents of non-physical object money believe that a form of money, or a system that operates like money but without the ability to transfer money from person to person, solves multiple problems that money creates. Essentially easing crime, theft, and corruption.

To solve this, non-physical object money systems propose the use of digital gateways instead of prices to unlock access to products, and sliders to indicate consumer happiness after the product is consumed, or the amount a producer will be rewarded after the initial transaction. The producer can then be rewarded after the results based on individual and consumer input are obtained.